The 5 coin First World War set started in 2014 and will be complete in 2018 to coincide with the start and end of the Great War. The series pays tribute to all those who fought to defend our nation.

The first coin in the set released in 2014 on the 100th anniversary of the start of the war. It is based on the war recruitment poster Your Country Needs You which famously featured Lord Kitchener with a pointing finger. Kitchener himself was killed when the ship he was on struck a German mine in 1916.

The second coin in the set released in 2015 marks the role of the Royal Navy in the First World War. Info on flag no flag

The third coin in the set released in 2016 marks the role of the Army in the Great War, the war on the land. 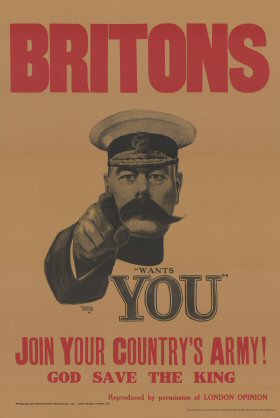 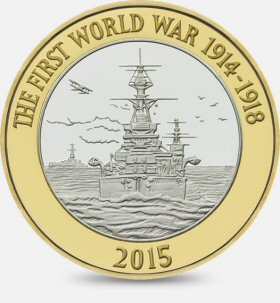 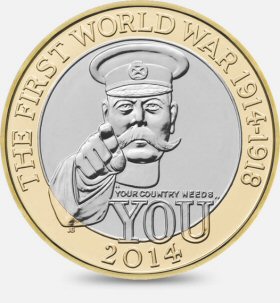 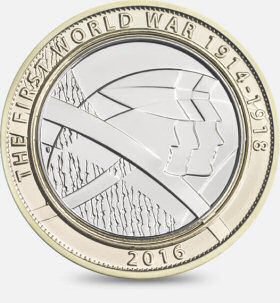 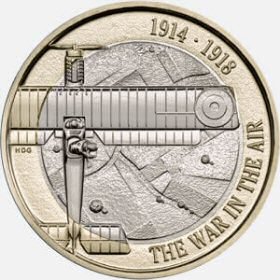 The fourth coin in the set released April 2017 100 years on from "Bloody April" marks the role of the aviators in the Great War.

WHY: The spark that started World War I was the assassination of Austria's Archduke Franz Ferdinand and his wife Sophie on June 28, 1914.

WHO: Austria-Hungary backed by Germany officially declared war on Serbia on July 28, 1914, an entire month after the assassination.

Russia sided with its ally Serbia, Germany declared war on Russia and France. German soldiers marched on France, through Belgium. Britain had guaranteed to defend Belgium, so declared war on Germany. In total 65 million men from 30 countries fought.

The United States joined the war in April 1917

THE END: Germany launched the 'Michael Offensive' in March 1918. However their plan for a quick victory failed when Britain and France counter-attacked. At 11am on the eleventh day of the eleventh month, in 1918, Germany signed the armistice and the guns fell silent.

The war lasted four years and four months. In London, a huge crowd gathered in Trafalgar Square to celebrate the end of war.

12 million letters were delivered to the front every week. It only took two days for a letter from Britain to reach the front in France.

War work turned some women's skin yellow. The so-called 'canaries' were women who worked with TNT, which gave them toxic jaundice.

Officially a British soldier had to be 19 years old, but about 250,000 lied about their age. The youngest Sidney Lewis was discovered to be just 12.

A common meal in the trenches was maconochie - a stew of turnips, potatoes and carrots. Other rations included bully beef and even Marmite.

The war claimed the lives of at least 6,000 men a day. More than nine million soldiers died during the fighting.

At Christmas 1914 an unofficial truce was observed, some German and British troops played a football match in No Man's Land. Germany won 3-2

A total of 346 British soldiers were shot by their own side, mostly for desertion.

The Victoria Cross was awarded 628 times. The youngest recipient was Jack Cornwell, 16.

At the height of the war the British Army had 870,000 horses. Dead ones were melted down for fat which was later used for making explosives.

When soldiers returned there was a baby boom. Births increased by 45 per cent between 1918 and 1920.

On the morning of the Battle Of The Somme, July 1, 1916, the British suffered 60,000 casualties - 20,000 dead. It was the worst toll for a single day in military history. Allied forces advanced six miles.